New link with pin is problematic 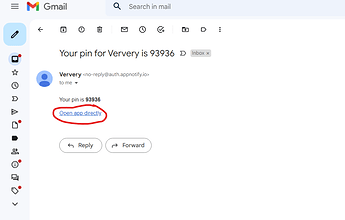 How do i remove this link from the email? It’s screwing up my sign ups.

It doesn’t send users back to the right tab and then they never fill out their profile and are never able to move forward creating an account. When I tried it myself, I kept thinking it wasn’t signing me in at all and even I was confused.

Please tell me there is a way to remove this!?

It doesn’t send users back to the right tab

Can you explain more on this? What tab is it directing your users to? Shouldn’t it be the root link of the app?

It’s just bringing my users to the first tab of my app. But when my users are signing up, they aren’t on the first tab, they on a sign up tab, which the original pin entry leads them back to…so that they can fill out their profile when they return. Now, with the link, it just sends them right back to the first tab and it looks to them like nothing happened. I couldn’t even tell i was signed in when i did it until i went to the hamburger and saw that i could sign out.

Alternatively, I have other tabs that also direct users to sign up in order to ‘favorite’ businesses or ‘leave a review’ so if they were on a different tab in the middle of an action and were directed to sign up, the link doesn’t lead them back to where they were, unlike the pin entry. It’s hard enough to get people to sign up without that confusion.

This is a video of me signing up via the link. As a user, I would have no idea that i am supposed to go back over to where it says “sign up” on the bottom right AGAIN and continue to fill out a profile. Hopefully that makes sense.

Please tell me there is a way to remove this!?

I would also like to remove it. If the app is already installed, and I sign out as one user and try to sign in as another user, by using the link in the email, it doesn’t even bring the app up correctly. The pin method continues to work correctly.

I haven’t seen it yet, but you have to wonder what the point of it is?
If a user is receiving a PIN, then clearly they have already attempted a sign in, so why would they need another link to the App?

I guess the assumption is that it would be easier to click the link than to navigate back to the app and put the 6 digits in, but if the link can’t bring you back to where you were within the app then it’s a problem more than a solution.

Been looking at this.

It appears that the link is not just a link.

The link signs the user in without the need for them to manually enter the PIN, convenience I suppose.

Perhaps the link wording could be enhanced - something like ‘sign in without PIN’ to make it clearer for the user.

I was curious, so I did a test of my own, with an iPhone.

So I still question its usefulness. I want to Sign In to the installed App, not another instance of the App in a browser window. And certainly not a pseudo-browser. Maybe there is a setting in my phone that could change that behaviour, but your average first time user probably wouldn’t have a clue about that.

So as far as I can tell, all this is doing is diverting users away from installing the App on their home screen, which is the last thing I want to happen.

I don’t think it is convenient or clear at all. The assumption is that the link is a convenient way to finish the action you were in the middle of that required a sign in. But unlike the pin entry, the link does not bring you back to where you were, thus confusing the user and stopping them from continuing to complete what they were doing…which for me, is creating profiles and paid accounts. My app is public, users sign up when they are trying to complete an action within the app that requires them to sign up, and the link diverting them back to the general feed tab is incredibly preventative.

100%. Same thing happened to me, the link button cannot differentiate where the user is coming from and where they needed to head back to. For me, almost all my users are new users that would likely just assume the app is faulty bc it’s brand new. Established users are likely already signed in and have the app installed on their phone already.

So as far as I can tell, all this is doing is diverting users away from installing the App on their home screen, which is the last thing I want to happen.

Yes, and thank you for outlining the behavior that I have been seeing if the app is already installed. I have not tested by first uninstalling the app, but from what you are saying, it will ignore the instance of the app that is already running and cause the app to not be installed at all.

I am getting ready to go live with an app (pro app but free to the user) – to an established user base – which means I will have a LOT of new users at once. This confusion could really give a bad first impression.

As we’re discovering, it signs the user in to another instance of the app — not the instance that is already running on the phone.

Thanks, yes I see that now

This is also confusing my users please remove this link!! @david

I guess it would be useful with a Pages project, as users are probably less likely to have that installed as a desktop app. But even then, the user will wind up with two instances open in two separate browser windows/tabs.

But even then, the user will wind up with two instances open in two separate browser windows/tabs.

And be confused. It does not take much to confuse a user.

Thanks for flagging! The purpose of this feature is to not require the user to fill in the pin manually. In your use case, it doesn’t work because you need to direct your user to a specific page in your app.

The team will work on making this optional.

Thank you so much! That would be extremely helpful!!

The team will work on making this optional.

Thank you for the quick response to the feedback! You guys are the best!