I have a non-profit business plan, and it appears Glide is making changes to the Usage. The amounts under Features doesn’t make sense and now it’s not allowing uploads.

Because of having a non-profit plan, I don’t have access to Support.

I have 1,000 users trying to access an app that’s not working. Can anyone help? 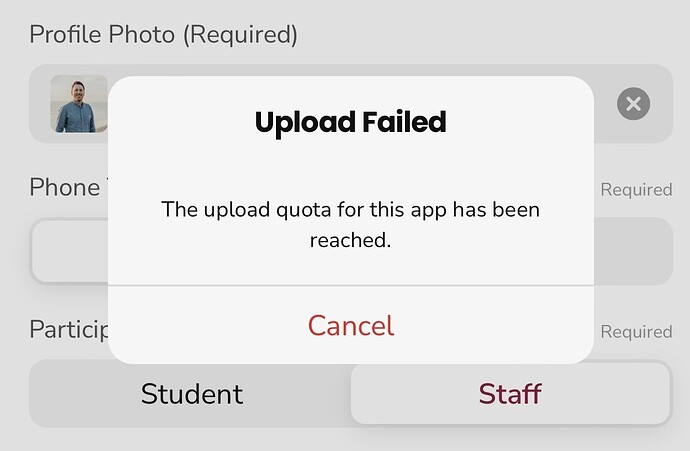 @david I have been emailing support about Update limits on a non-profit account and they informed me that changes would be made soon to the non-profit plan. I see that my update limit has been reduced from 50,000 to 25,000, but was it intentional that there isn’t File Storage included now either? And it appears Public Users have been lowered to 100 and Editors to 1?

I had an issue with my credit card that has been fixed and I received a payment confirmation, but I’m still having this issue. (I thought maybe it was doing it because of the billing issue.)

You guys have been super helpful in the past. Any insight into this? Sorry to be impatient, I’m just being bombarded with emails from users about the app not working.

@Clifton_Crouch we’re looking into an issue with non-profit limits and should have an update tomorrow.

@david I just realized that my API call to Glide is also no longer working. Has this feature been removed from the non-profit plan as well?

If features are being downgraded or removed, is it possible to be “grandfathered” in? I’ve been a non-profit user from right around the time it was launched and I’ve built projects based on the original features that were communicated. I have active projects that won’t be working correctly as a result.

If changes are being made and there is no allowance made for current users, could those changes at least be communicated first and then a set amount of time given before they go into effect so that I have time to update my projects accordingly?

Here’s an automated email I received overnight in case it helps at all with figuring out the issue. 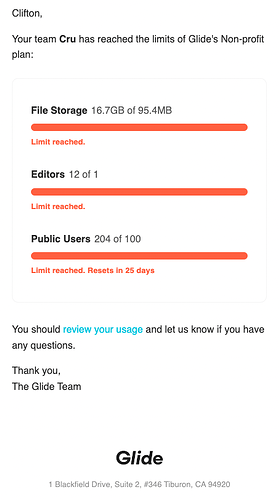 Thanks @Clifton_Crouch for the added details. You can tag me as well on these threads.

@david and @andymci Is it possible to get any kind of update yet?

We have about 300 people arriving tomorrow at our conference and another 700 on Friday. All of the conference info is on the app, so if it won’t be fixed by tomorrow morning, I need to do some major work to figure out a backup plan. Thanks!

(An email already went out to all participants to ask them to install the app yesterday morning (1/10/23), but I’ve put an error message on the profile creation page for now.)

Hi @Clifton_Crouch … I just checked my Usage details for my non-profit team and things look to be correct now. Can you confirm yours is fixed too?

It’s appearing correctly for ours as well! I’m currently testing the few apps that are active right now.

It appears that the issue with the limits has been corrected!

The API call still isn’t working, but I can do a workaround for now.

I’m also noticing that CSS no longer seems to be available for this plan. I haven’t heard anything official, though I’d expect a notification if they were to remove anything.