Is there a way to switch from googlesheets to glide tables ?

Also, is it possible to have two different apps to point to the same glide table like you can do for google sheets ?

Is there a way to switch from googlesheets to glide tables ?

No easy way, no. (I wish there was).
There are several ways you can move the data (non-computed columns) from GSheets to Glide tables, but you’ll need to re-create all your computed columns and reconfigure all your screen components. The Find Uses feature is a godsend when it comes to this.

Also, is it possible to have two different apps to point to the same glide table like you can do for google sheets ?

yep, absolutely. As many as you want

How do I reuse an existing glide table ? when creating a new project I see this screen, when I choose Glide Tables it seems to create a new table for that app 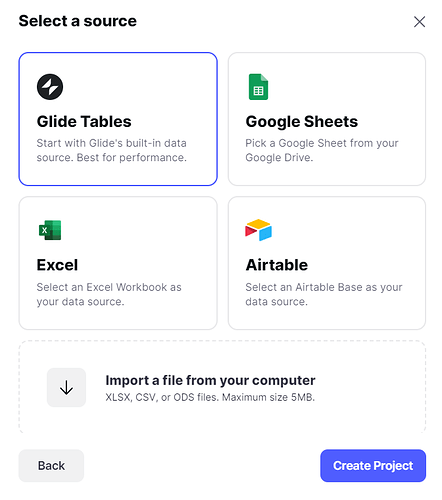 You can link existing Glide Tables from the data editor, and then unlink/delete the ones you don’t need.

If we’re still in the context of switching from Google Sheets to Glide tables, I would probably start by making a copy of the App, and then replace the GSheet sourced tables with Glide tables one by one. Once you’ve replaced all sheet based tables, you can remove it as a data source.

Regarding Google Sheets move… I think I will give it leave it for now. It is too risky with too much logic. I have 3 apps looking at the same sheet

I could be wrong, but I don’t think it would be too difficult for Glide to implement a transfer feature, they will be a very good position to copy and remap. About 8-9 months ago when new pricing model was released, I recall reading that they were thinking about it. Not sure if there is still the case to invest the resources.

I feel your pain. I have about 6-8 Apps that share the same Google Spreadsheet source. I’d love to migrate these to Glide Tables (in fact I’ll have to eventually if I want to scale above 100k rows - which I do), but it’s just too much effort to do it. I’m holding out in the hope that Glide will eventually give us a migration tool. I’ve been told that it’s technically feasible - it’s just a matter of it bubbling to the top of the prioritisation list. Vote for it below:

Hi, As mentioned before that I started to see a good side of using Glide Tables instead of using Google Sheets in some cases, like some tables might be updated rapidly in real use. But this hunch always came a bit late; After a while of putting up so many relations & lookups & data templates, then I realized that this sheet might have less problem if I changed to Glide Table. But this means a do-over with all the table setups, not to mention all data links on the interface will be cut-off whic…