I can't create a condition

I’ve been working on Glide for almost two years and this has never happened to me. I’m clicking the “add condition” button and absolutely NOTHING happens.

I have two tabs and in neither can I add a condition. Glide getting worse.

When reporting bugs, please add a video and/or screenshots to demonstrate the problem. I can’t replicate the issue here. 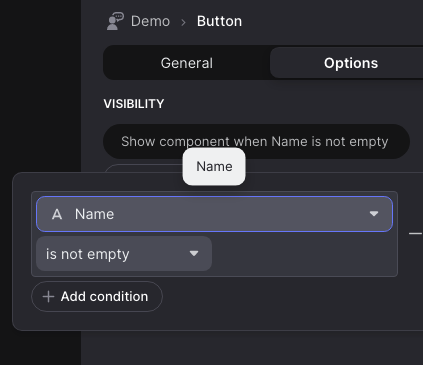 So they won’t fix said problem by not attaching an image/video even though the problem is explicitly detailed?

I would not say this is “explicitly detailed”. When reporting a bug, an image/a video would help us know better what exact settings are you using, or whether there are things that can affect the situation, without making assumptions and potentially giving the wrong advice.

I won’t say they won’t fix it if you don’t attach an image/video, but it would lead to faster and better responses if you do so.

How to Report Bugs Effectively.

I can vouch for this. My paying job is support level programming. I spend more time researching and trying to reproduce a problem, than I do actually fixing the problem. A lot of times it involves contacting support to ask the user for more information, such as complete screenshots, step by step instructions to reproduce the problem, or other types of additional information. It’s extremely frustrating when I have to go back and forth just to get more information, because a lot of times I don’t have any issues when I try it myself. Sometimes it’s a particular server that’s the problem. Sometimes the user is taking steps that I would have never considered. Sometimes it’s only one particular scenario that causes the issue.

Whenever I report bugs I try to be extremely thorough, because I know what it’s like to be that programmer or support person on the other end that’s just trying to get enough information to reproduce the problem. If something can’t be reproduced, or it’s impossible to understand what the problem actually is or how the user got to that point, then it’s impossible to fix because it’s unknown what part of millions of lines of code need to be fixed.

I once had a problem at my job that only surfaced a few times a year and neither I nor the user knew how to accurately reproduce the problem. We had a program that would end up in a continuous loop for some reason because of a highly specific order that the user performed certain steps. It took me a few years to fix because I didn’t know what was causing the issue, and even then I think I ended up putting in a hacky fix just to get the loop to terminate after a certain number of loops. That isn’t a solution that I’m happy with, but it’s the best I could do with the limited information I was given. If I knew the exact problem and the way to reproduce it, then I could have had it fixed in a matter of hours instead of years.

It’s like handing someone a piece of paper and a pencil, and asking them to write something down. Then they say it doesn’t work. Well, did they put the pencil to the paper? Did they use the wrong end of the pencil? Is the pencil broke? It’s the paper covered in wax? Yes, theoretically it should work and 99% of the time most people can write on paper with a pencil…but sometimes there are extenuating circumstances where it may not work and it helps to have as much information to understand why it’s not working.

I can vouch for this.

I stumbled on that essay many years ago, and the wisdom in it immediately struck a chord. At the time I was working in technical support (managing a Network Operations Centre), so it was very relevant to my daily job. One thing I like about it is that there are several translations, so most people should be able to read it in their native language and hopefully learn something from it. It’s written by Simon Tatham, the creator of PuTTY - which was a very popular terminal program for Windows back in the… well, a long time ago

Anyway, whenever I see poorly formed questions or bad bug reporting, I’m always tempted to post a link to that essay. Every now and then I succumb to that temptation

It’s funny how the thread went to the side of talking more about me not attaching any video even though the problem is extremely simple and very explicit. Sir @Jeff_Hager I have over a year of Glide experience and I assure you that I have been mindful of any “mistakes” or “confusion” on my part for such an error to be occurring. And I assure you that it is not my fault.

Anyway, here is a video of the error. As you can see, I click infinite times and nothing happens. This only happens with conditions, not with filters or actions.

And any other basic question the answer is a resounding “Yes”. I know how to solve basic errors since I am a computer scientist. The bug is from Glide.

In advance, thank you all very much for being part of this thread and for responding so quickly. They are a great community!

That video told me a whole lot without any words. By observing the ‘Learn More’ link on the visibility conditions, that tells me that the user profile isn’t fully configured. If it was, then you wouldn’t see that ‘Learn More’ link. I see that your user profile appears to be configured, but your image column is not. If you point the image setting to a column in the user table, then it should work to set the visibility on the tab. At least I was able to reproduce it with those circumstances. With some quick tests I did observe that you can delete a column (such as the image column) and the user profile will still be linked enough to use it for tab visibility, but if you initially set a user profile to a table that doesn’t have enough columns (such as name, email, and image) then it will be an incomplete profile and won’t allow you to configure tab visibility.

Just make sure that the User Profile tab is actually showing something on the screen. Then you know that user profiles are actually configured. 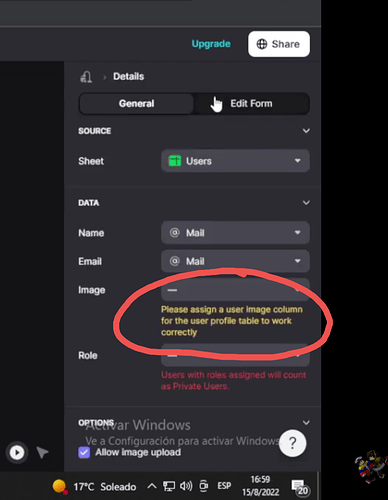 unknown what part of millions of lines of code need to be fixed.

Ha! So true! They always say that you should pay more for someone who can do something quickly and well, compared to paying less to someone that takes twice as long for half the price.

You’re paying for the continued experience and education that allowed them to reach that level of skill. 21 years of debugging code and user interfaces has taught me that the problem isn’t always at the point where it presents itself. Sometimes it can be much higher up the chain or something completely unrelated. Always start with the visible result of the problem, and then debug backwards until you find the source of the problem. A lot of times there are very subtle clues that can lead you to the real source of the problem.

And any other basic question the answer is a resounding “Yes”. I know how to solve basic errors since I am a computer scientist. The bug is from Glide.

Please understand that nobody is being critical of you or your credentials. We just want to help, and your original post didn’t provide enough information. When somebody reports a bug, the first goal of a developer is to be able to reproduce the bug and see it failing in front of them. Once they can do that, then fixing it is usually the easy part. If the bug report is inadequate, then questions need to be asked and more information gathered - at least enough to be able to reproduce the failure.

To quote from the essay that I linked to:

Give the programmer some credit for basic intelligence: if the program really didn’t work at all, they would probably have noticed. Since they haven’t noticed, it must be working for them. Therefore, either you are doing something differently from them, or your environment is different from theirs. They need information; providing this information is the purpose of a bug report. More information is almost always better than less.

One reason that Glide Support always ask for a video is that this helps them to see and understand what you are doing to trigger the error or bug, eg:

That video told me a whole lot without any words. By observing the ‘Learn More’ link on the visibility conditions, that tells me that the user profile isn’t fully configured.