How would you describe a helper table?

Hi all, ‘helper table’ seems a way to get things done with Glide as ‘invented’ by users. I don’t think I find it in any official Glide docs. How would you describe a ‘helper table’ and in what cases would you use it and how? Maybe this post + reactions can make it to the help section afterward

I use Helper Tables all the time. Most of my Glide Projects are littered with them. They have many uses, here are just a few examples:

This is one I learned from @Jeff_Hager. The usual way to create a custom form is with a “Show Detail Screen → this item” action. This gives you a new details screen on your current row with a blank canvas, on which you then build out your form.

However, another way to do this is by using a single row Helper Table. You create a Helper Table and add whatever columns are required for your form, and then build it out using a details screen on top of that table. Then any time you want to use it - from anywhere in your App - all you need is a “Single Value → First ->Whole Row” to your Helper Table, then do a “Show Detail Screen” via that Single Value column, and viola - you have your custom form ready to go.

Sometimes you might have an array of values that need to be transposed into a list. Maybe you want to use them as the source of a Choice Component, or maybe just in an Inline List. Helper table to the rescue. Just create enough rows to cover the maximum number of items in the array, then unwind them using the RowID->Lookup->Find Element Index method. (This method is described in detail in @Robert_Petitto’s Miracle Method tutorial).

Helper Tables are ideal for pulling together data to be used in Charts or HTML tables. Sometimes it will just be a single row table, and sometimes there will be multiple rows. It depends on the use case. One common use is where you might be building a chart/table that has monthly totals of data. In this case, you'd generally have one row for each month of the year. You build relations to your data, and then use rollups to pull in the aggregated data, and feed that into your chart and/or HTML table.

And that data feeds into a table that looks like so:

In one App I built, there was a requirement to be able to add anywhere between 1 and 52 rows with a single button click. The way I approached that was to create a 52 row Helper Table, and collect all the data required into that table. Then bundle the whole lot up into a JSON object, send that to Make, and have Make insert the required number of rows back into Glide via the API.

I won’t say too much about this one, except to say that I’ve been able to develop a method for storing and extracting up to thousands of “rows” of data in a single table row. The use of a Helper Table was key in being able to do this successfully.

Another use for a helper table is to dynamically consolidate data from two or more tables into a single table for a particular purpose. An example of where I’ve done this is as follows:

My users need to to be able to generate a CSV export, and specify a date range. That date range could potentially mean that I need data from all 3 tables. In order to deal with this, a Helper Table is used.

So that’s just a few examples. I could probably go on about Helper Tables all day

Wow! Thanks so much! Really valuable!

This is done with the use of user specific columns and/or computed columns. When put together, it allows the helper table to perform it’s intended function and give you whatever result you need.

Sometimes you will see them referred to as work, or working tables. At my company, we have tables that only store data for a short amount of time while a program is running. Once the program is finished, then the table can be cleared, so it’s ready for the next run. We tend to call these work tables.

Another way to think of it is like RAM on a computer. RAM is a temporary place for data to be stored while a program is running on a computer.

I think of them as a creative way to “write code”, or get a “code like” experience in a no-code environment. There are a ton of uses for them.

ah yes… hehe now I realise that whilst I gave plenty of examples of how you can use a Helper Table, I didn’t actually address the question of what it is

Thanks for filling in the gaps

However, another way to do this is by using a single row Helper Table. You create a Helper Table and add whatever columns are required for your form, and then build it out using a details screen on top of that table. Then any time you want to use it - from anywhere in your App - all you need is a “Single Value → First ->Whole Row” to your Helper Table, then do a “Show Detail Screen” via that Single Value column, and viola - you have your custom form ready to go.

Darren, I think I’m missing bits of knowledge or logic on the way

So right now I have a One Pager table with columns like Name / Header / Subheader.
And so far I have made a button > show form screen, writing to a new row in that One Pager table but with some explanation texts in between (see picture below). 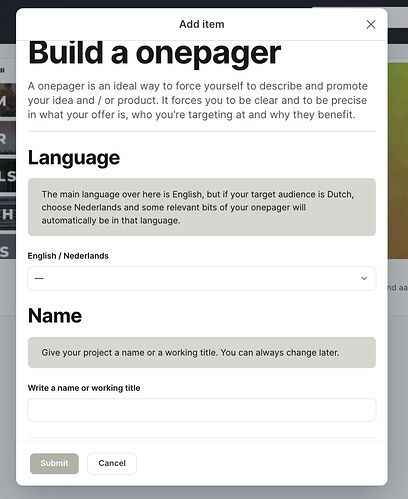 Do I understand it right?

Yeah, you’ve got that all wrong

But before we dive into troubleshooting, let me ask a question: Do you actually need a reusable Custom Form (or even a Custom Form at all), or are you just doing this as a learning exercise?

For me now it’s mainly a learning exercise in my phase of understanding when and how I need / can use a helper table. So maybe all this is not necessary

It might be easier if I make a short video guide.
But not now, I’m kinda busy