Hey Gliders!
I wanted to share with you 2 feature requests I made.

Here are the conditions for editing: 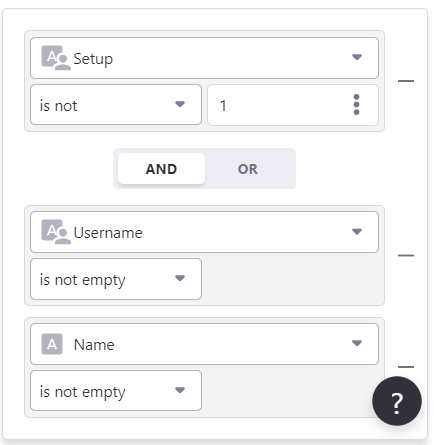 Increment action - Ability to increment a logged in user’s field

So this is what I wanted to do: When user clicks button, it brings them to whatever link and increments Logged in user>setup. However, it’s actually just incrementing the first user’s setup. In other words, I want it to increment this:

However, I do believe there should be a workaround one way or another here so I’m not making a feature request (yet). Does anyone know how to do this?
Thank you!!

If you need to have an AND and an OR condition, use an if-then-else column first.

For example, let’s say you want to a list of events that can only be edited by the event owner OR any app Admin AND only if the event hasn’t happened.

Create an if-then-else column in the data table from where the component resides (let’s name this column “Editors”)
Create your OR condition within this if-then-else column. For example, if you want where Admin is True OR where email is signed in user, then create two if-then-else conditions:
if Admin column is True then “true”
if Email is signed-in user then “true”
else “false”
In your component conditions, create your AND conditions. In the Details > Edit > Conditions, you can now create the AND/OR logic by stating Allow Editing where “Editors” is “true” AND where eventDate is after Today.

I’m such an idiot

I’m testing it out now.

Edit: Robert, I found an easier way of doing it (for me) But you inspired me

I can just make a template column (lets call it ‘Template G’) having Setup Username. I can then make an if-then-else column saying that if Template G is 2, then TRUE. If Template G is 2 Pablo, (Pablo being my username) then false.

@Robert_Petitto Do you know any workaround for feature request number 2? When I increment a user, it doesn’t increment the logged in user, but the first user on the spreadsheet…

And not only that … But also, when we use a specific user column to increase, when reloading the app, the increased number is deleted. The same happens whenever the Row ID is used

Depends on your set up…is the details screen filtered where user is signed in user?

Our app isn’t public, it’s public with email, so the user is already going to be signed in… right?

Depends on your set up…is the details screen filtered where user is signed in user?

Okayyy I filtered the tab by Email is Signed in user, and it didn’t do anything…

What was it supposed to do?

Ohhh thanks so much Ill try it out tmrw!

Didn’t work, @Gerard_Fernandez. Still the same as before…
You can copy the app here: https://go.glideapps.com/?copyApp=JR8MP1KKlhDVlcAjKDRe

Cannot interact with the app. No edit profile…nothing

La he descargado pero no puedo hacer nada. No me deja…

@Gerard_Fernandez Pick a user to preview as.

@Pablo_books not sure which tab you are having a problem, but the Launch tab seems to work when previewing as the second user. Looks like you have row owners, so it should automatically show the correct row to update. Otherwise, you can always filter by user, but it seemed to work. Unless I should have bee looking somewhere else in your app. Which screen and column so you have issues with?

Perhaps a video with your proberm can help us understand better

Hey, I made improvements to the launch tab. Ecerything goes well except for the ‘continue to the forum’ button.

Now the tab doesn’t even show up!!!

I filtered by Email is Signed in User and the Launch tab does not appear!!

I am so confused, overwhelmed, and desperate…