How to add members to a group, using comma separated values in a single cell, instead of extra rows for each new member?

Typically when adding members to a group i could add a new row (for each new member of a group) to a groups table and just indicate the member name and the group they are in, within the same row.
This is quite costly in terms of rows of data that are duplicated. Jim is repeated on multiple rows and the same with all other users. 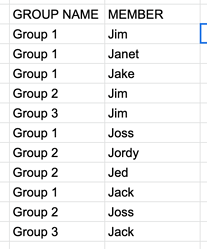 But for some reason i can’t just add this relation to an inline list OR collection.
Anyone know if this is possible or is there a better way to achieve my objectives?

You’re on the right track.

I would use UserIDs (RowID’s) rather than names. Then you won’t have a problem when you have 3 separate users all named Jim.

Yes, in fact i’m using emails but i didn’t want to post that online so i used names for the example image.
Yes, Split Text Column👍
It’s the weirdest thing, because i have the relation but for some reason it only shows my name as having joined that Group. It doesn’t show any other people that have joined that Group.

Do you have Row Owners applied in your Users Table?

I wonder if it’s because the email i’m adding to the joined list is via a template column that’s showing the current signed in user? 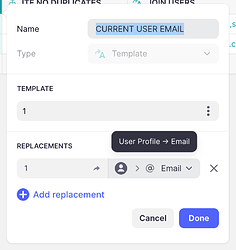 I just checked and it was on. Aaaarrrrgggghhhh!!!
Not sure why though, i never use that function. It’s a glide page, i think they automatically create sample pages with that turned on, must be?

Okay let me see if this works, will let you know, thanks for the help👍

Not sure why though, i never use that function. It’s a glide page, i think they automatically create sample pages with that turned on, must be?

Yes, it’s enabled by default when you create a new project.

Perfect, it works. I think this is going to save me massive amounts of rows, and maybe keep the app more efficient.
But i think there will be other limitations like deleting a member out of a joined list? Will try some trickery!
Thanks again for the help👍

But i think there will be other limitations like deleting a member out of a joined list?

In certain situations, a single column has the potential to replace an entire table of data. The Trebuchet Method allows you to create an inline array that allows you to create a SIMPLE one-to-many relationship between two sets of data without the need of a log or submissions table. Examples: Who owns which item Who has registered for an event Who has completed which task Pros: no app bloat no additional rows of data fairly easy to set up Cons: Can only track one data point (eg. who ha…

Thanks👍 Will have a look right now✔️

Classic!!! That’s exactly what i’m looking for. And that method uses a lot less columns than what i’m using👍

If you use a multi-select choice component to add or remove members, it will be a lot easier.

Yes. If you, the admin, are adding/removing people, then use a choice component. Only use the trebuchet when you want people to add themselves.

So bummed i didn’t see your messages sooner, i spent the last 4 hours figuring out a trebuchet variation for admins to add users to the group, then took 3 minutes to do it using a choice component. as per yours and Jeff’s suggestion. Looks way better and uses no extra columns since i’m just adding Users Id’s into a Groups “CSV” column.
Anyways, i learn’t a lot and had fun Gliding. Thanks guys👍

Learning is invaluable. Even if you don’t use it now, you have an extra toolset for the future. 4 hours to grasp and implement a concept like that is honestly pretty good.

Just to be clear, i used the Trebuchet method for users to join a group themselves, and i used the multi-select choice component method for admins to add users to the groups. All works beautifully👍