Ya…It’s not super elegant. You’d need to define what a “sentence” is…perhaps a template column first to replace all ending punctuation with a || or something and then split column with || being the delimiter. 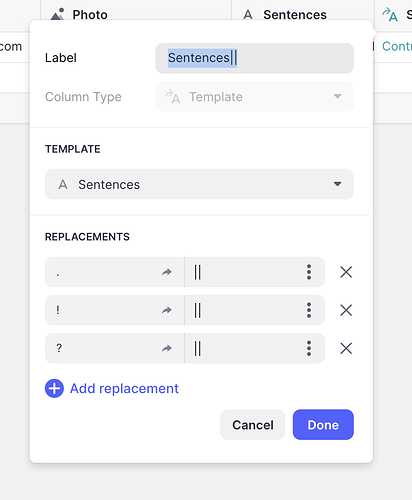 Yes, it was a no-code route I was looking for (otherwise, why not just use Python?). That’s very impressive, thank you. I’ll follow it through carefully. Good viideo!

Thank ou. Very impressive, I hadn’t thought at all of that approach. I replicated it and it all worked beautifully, except that I didn’t understand how you make the initial set up. At 0:49 there’s only one row, and then by 0:50 there are loads of rows and the first row of column 1 is repeated all the way down. How did you do that? And the same with the rowNumber column; it’s a <> column, which seems to mean a code column, but I can’t find anything that generates the row number. In the video you appear to be pressing New Row repeatedly and the next row appears with the row number and the start text just appearing automatically.

Everything else makes sense, except for bringing in the users: is that so that each user can do their own analysis? I hadn’t looked that far ahead.

BTW about sentences: if you split on ‘period followed by space’ you presumably have a problem with sentences that end a paragraph and are immediately followed by return. Of course, you’re right about periods marking abbreviations like ‘Mr’, not to mention the other marks that you also mention. And then there are ellipses marked as three dots ‘…’. Nothing about language is easy!

At 0:49 there’s only one row, and then by 0:50 there are loads of rows and the first row of column 1 is repeated all the way down. How did you do that?

You should get an auto-incrementing number, beginning at zero.

That’s very ingenious. Thanks Darren! I would never have invented that.

We didn’t invent it either…it was featured as a reply to a recent post of mine:

RowID is great. Could REALLY use Row Number Feature Requests

Yes, this can be added in Google Sheets…would rather have a native solution. Just a simple 1 through X where X is the number of rows in the table. This would work REALLY well with the Single Value column.

yeah, this one is a bit of game changer. It’s been less than a week and I’ve already found several uses for it. All kudos to @11183 - a really simple and elegant solution

Okay, does anybody know how to change username here?) I’m becoming famous))

Speaking seriuosly, i was thinking a lot about this problem, even though i personally don’t need it in my apps. That was just kind of an interesting challenge.

It’s incredibly useful when used in combination with the array-transpose method.

Transpose Columns to an Inline List: The Miracle Method Tutorials

I’m often asked how to take columns of data (say form responses) and display them in an inline list. Here’s one way to do it—the MIRACLE METHOD. [Glide: Transpose Data Columns into an Inline List with the MIRACLE METHOD]

That method is truly pure miracle) So as all of your ideas and solutions. Big fan of your tutorial videos, watched them all) Keep going💪🏻

Hi, How to separate into different rows when using joined list? I want to join different comments from users, and show them in the report screen.
Exp:
Turn this " abc, def, ghi" to
abc
def
ghi
@ThinhDinh @Darren_Murphy @Robert_Petitto
Thanks.

Just change the separator when you create your joined list. Instead of using a comma, use a CRLF (carriage return line feed).

I try this but It did not work. What’s separator I need to type in? Thanks
@Darren_Murphy 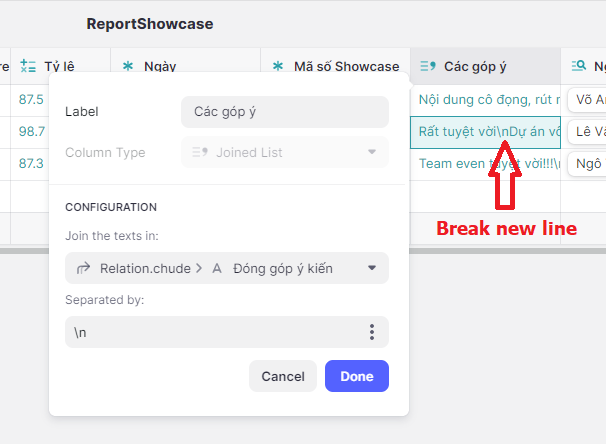 No, just use the enter key.
So it will look something like this: 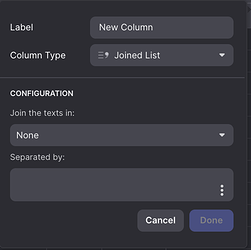 Thank you. I did it, such a simple solution :))