what a news ! I don’t understand this decision. As expert, this hack was also an option to upgrade the look and feel of our app. Client came to us because it was possible to do that.

As @Robert_Petitto we have to many app to update…

Since Glide focuses mainly on internal functional tools, it won’t be much of a problem that they look a bit the same. For every company internal they are unique. More and better design tools would be nice though.

We are working on expanded design options, which is part of what will cause CSS to break.

More info about specifically what is happening:

The internal layout structure (what is technically called the DOM nodes) of Apps is changing to make apps faster and for other benefits. Since CSS was never officially supported, CSS selectors (the syntax that picks out elements in the app to which to apply styling) relied on the contingent structure and hierarchy of the DOM nodes (e.g. add a shadow to the third sub-component of the first sub-component before the tab bar). This contingent structure will change significantly in the coming weeks.

Now more than ever,

Please vote here and leave a comment, so it goes up in the feed.

@Darren_Murphy - Does this mean the VERY cool roll-up tables I created based on your methodology will no longer work? @ThinhDinh - Does this mean we can’t have sticky elements at the top of the screen? Or replacement ‘Search’?

These are KEY features my prospects like and I see no way to recreate them in Glide.

But especially displaying data in a very concise manner is required - AKA TABLES ARE VERY IMPORTANT.

@david - Is Glide coming out with replacement functionality/augmentation of tables to make them useful for displaying data concisely? 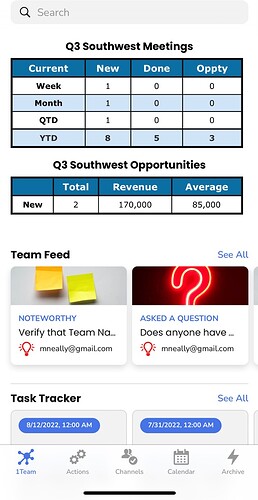 Hi sr. @david That’s great but so many requirements that are needed in glide as the customization of the templates it would be good if they give a preview of what is coming to be informed

@Darren_Murphy - Does this mean the VERY cool roll-up tables I created based on your methodology will no longer work?

I think the best you’ll be able to do - at least in the short term - is recreate them using Markdown. Functionally the same, but not quite as pretty.

A query about the use of the app script in google sheet if it is official in glide or not?

App scripts are not a part of glide. They are integrated into google sheets, so as long as you have a google sheet as your database, I don’t see a reason why you would never be able to use them in the future. Glide won’t provide official support for app scripts, but they are also not tied to glide in any way.

That’s right, that’s why I prefer that the CEO confirms to all of us if it’s official or not since we don’t want to get this big surprise later hehe

A query about the use of the app script in google sheet if it is official in glide or not?

You can do whatever you like with apps script in your own Google Spreadsheets. It used to be that Glide would not accept templates that used apps script in the back end. But that’s moot now as all templates must be based on Glide Tables.

Regardless, the use of CSS compared to the use of app scripts is comparing apples to oranges. CSS directly affects glide components. App scripts affect an external third party database. Glide would not have any control if you use app scripts or not. They have no knowledge if you use app scripts or not. All of that is on Google’s side. It would be a matter if Google drops support for app scripts, which is highly unlikely. The only control that Glide would have is if they would ever drop support for Google sheets altogether, which again is probably unlikely.

Does this mean we can’t have sticky elements at the top of the screen? Or replacement ‘Search’?

Sticky components - no
Custom Search - yes, as that doesn’t require any CSS

As a new user to Glide (3.5 months into this journey), I discovered that Glide REALLY depended on experts in the community to answer questions because Glide documentation is not in-depth. Searching community.glideapps.com and looking at videos from experts like @Darren_Murphy & @Robert_Petitto (and Jack) were a solid, if more time-consuming method to learn the many nuances of Glide than having excellent documentation to turn to.

And the experts, basically to a person, supported extending Glide in new ways via Rich Text. Sure their was this disclaimer in the documentation but IT WAS YOUR EXPERTS, the ones you depended on to educate the new users, who promoted this method.

Glide, as an organization, knew what were popular HTML/CSS features and which of these features your developers depended on for their customer success. This thread strongly implies this change was implemented/rolled out with minimal concern to the experts who have promoted and tried to separate Glide from the other NO-CODE options by getting their feedback on how to minimize the obvious disruption this would cause.

Over my 30 year sales career I have had to explain to customers and partners when significant changes (once including a bankruptcy) were coming and the impact on themselves and their customer’s operations and finances. I feel this was one of those times for Glide and that there was a disconnect between corporate and Glide’s main constituents and proponents.

I hope that Glide will look at the key Rich Text/HTML/CSS use cases and devote Glide energy, time, money and resources to minimize the disruption/pain to Glide customers and developers this change has caused the devoted Glide community by showing how to implement current popular RT features under the new methodology.

Thanks, but it is all because of you, my man!

Glide really is falling behind. This is one of the things that prove it. ALL my applications use and have used CSS (which is very difficult to apply since its component classes change many times). And we are already aware that you have warned that using it is not supported, but the fact is that if we didn’t, we would only have linear “applications” of the column with very basic customization. The CSS/HTML really made a difference. In a few days I will talk about this and the issues that led me to stop using Glide. At this point and with its new pricing it is almost more feasible to make a wix page with its responsive mode

Tell Glide how you use CSS Announcements

Hi all, I’ve been starting to look into CSS usage in Glide and how we can better serve you. I would love if y’all could help me with this task by doing a few things. Give me a description of what you are using CSS for. Give me some before and after screenshots of what your CSS does. If it adds motion an movie would be amazing. If you are open to it, include your CSS snippet as an inline code block. Keep it short! I want to gather a large gallery and it will really really help me act…

…from Glide might have given the impression that they intend to support it and we’re doing “work” behind the scenes to support it or at the very least, steer clear of the most used class names for CSS manipulations…

I feel for the advanced users who have quite a number of Apps that make use of CSS even though myself I do have some Apps that use CSS but I have never been an extensive user of CSS because somehow I “knew” this day would come.

The truth of the matter here is that if Glide was offering better design options for their Apps, people would not have to use CSS…more needs to be done to natively change things like putting an image in the background, more colour options for buttons etc…

The truth of the matter here is that if Glide was offering better design options for their Apps, people would not have to use CSS…more needs to be done to natively change things like putting an image in the background, more colour options for buttons etc…