I’m trying to add a new user in my app, and in doing so assigning this user the same “Role”. (Pro App, using Roles).

But Glide doesn’t allow me to do this. I’m 99.99% sure this worked a week ago, so maybe they’ve changed something?

I’m aware of what they describe here, regarding roles: Roles
but how do I then assign the same role to my new user, if my current approach isn’t doing the trick? 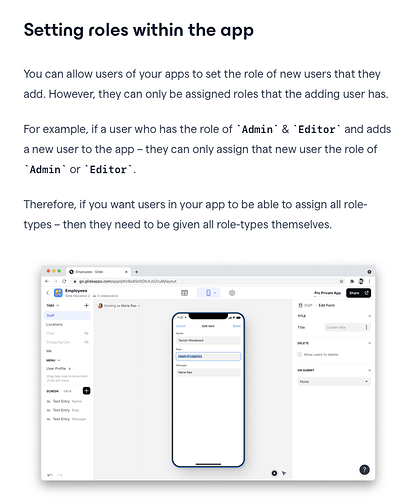 Yeah, I can replicate this. Glide allows the role to be initially set, but it doesn’t stick.

Just to double-confirm: the signed in user already has the role that you are trying to assign, yes?

(for what it’s worth, I generally use Make for assigning roles)

Yes, I can confirm that.

And my apps are acting weird right now: I wonder if they have changed something relative to how Roles work.

And here’s what I’ve also begun experiencing:
I pull in the same table in a “Public App” where I’m NOT using Roles, but rather email addresses from another column as Row Owners. Here I can suddenly no longer list rows created from my other app (Where I use the roles).

update: This is only the case sometimes… It seems a bit erratic / random… Trying to identify a pattern in this. Would be great with better documentation on how Roles work. Also across apps.

Make, otherwise known as Integromat. Send a webhook with the Users RowID and the name of the role, and then push it back in via the API. With this method, any user can set any role.

It seems a bit erratic / random…

Yes, I’ve also noticed some dodgy behaviour in the past few days. I reported a role-related bug last week where Glide was only recognising the first role in an array of roles (array created in an attached Google Sheet).

Would be great with better documentation on how Roles work. Also across apps.

It should be App specific, even with shared user profile tables.

I hope this is something they’re looking into. It’s rather critical for me at least, if I can’t “trust” the behaviour of Roles.