Hello, am i the only one with this problem ?

It’s pick a random color in background in top bar.

Happening to me too, and another user.

I noticed a few weeks ago that the spinning load circle was a different random color on different tabs whenever it was loading heavier screens. Now it seems to correspond with the random top bar colors as well. None of the colors are consistent either. Sometimes they change while navigating the app and sometimes they stay the same. There is no noticable pattern.

I was just about to post on this Android BUG! It’s causing our clients to NOT be happy! Below is my post… 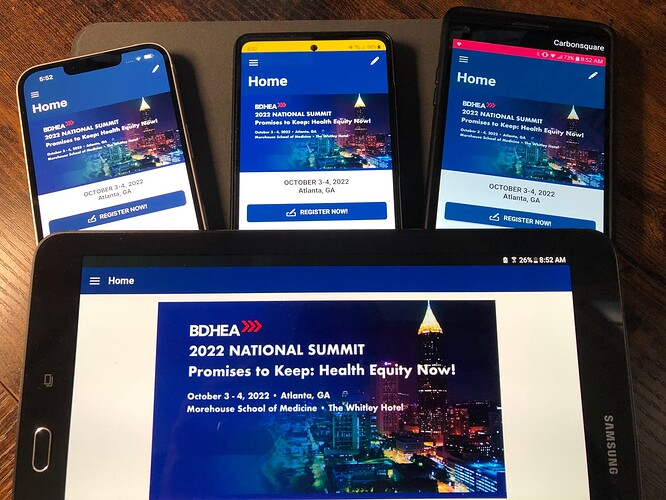 We noticed a “New” annoying issue happening on our Android User’s phones occurring in the past 2 days. It appears that the top “Notch” or “Status” bar that shows time, battery status, etc. has now “Lost” it’s ability to hold the app’s accent color beyond the log in screen. As users click through app tabs they now see a variety of bright random colors at the top of each app screen.

This does not occur on any iPhone devices (with notch or without) but on Android devices where it used to visually be consistent with the rest of the app’s color palette, it’s now visually distracting.

On Android tablets (pictured) it still remains black across the top like in the Glide developer simulator, but on ALL actual Android phones, it now is extremely colorful on new and old phones but out of character to how the interface should function. Our clients are NOT too happy either as this effects the overall app branding standards.

CAN THIS BE FIXED to function as it used to?

Yes, i saw that, this bug was showing in a new app where i workin on it, but it’s not showing in all apps.

But of course this need to be fix sooner as possible, because it’s pretty ugly btw

Ours is in ALL apps, new and old now.

cc @SantiagoPerez - are Glide Support aware of this one?

At first, I thought it was me, but I saw this in all my apps.
But it looks like I am not the only one.
Hope they can fix this soon. People keep on asking me what is going on.
And some think that they have a bad internet connection.

I can repro. Thanks for flagging @Darren_Murphy

Note that this problem ONLY occurs in the downloaded version of Glide app on Android phones and NOT an app opened in just the browser. Unfortunately it’s the downloaded app that we keep fielding calls about this issue.

Came here to say the same and also just want to say…I love your app! I have it downloaded and didn’t notice this on my end so it’s definitely random.

Ahh ok not just me. Didn’t see this thread before posting so deleted my post to copy paste here. I am NOT in dark mode and it happens to mine. Super ugly

Is this issue NOT occurring for everyone who has deployed apps or do you just have an iphone user base? Since its a core part of the Glide code, maybe something was changed recently in the backend when updating the new iPhone and Android simulators in the backend Glide editor.

This literally just started in ALL of our apps, even older ones, so its not a cause on our development side. What should we tell our clients as the issue persists and stands out very prominently?

We’re looking into the issue.

Is the color random? That’s bizarre.

Yes color was random, amazing we waiting so !