RowID - sending to Airtable when creating a new record

Am wondering if there’s a way of sending the Glide Row ID to Airtable when creating a new record.

I have tried creating a new record, then automatically adding the RowID in a New Form Container - but I guess because the record isn’t generated until after the form is submitted - the RowID doesn’t exist at that point (it actually enters the RowID of the first record in the table - which I don’t understand! 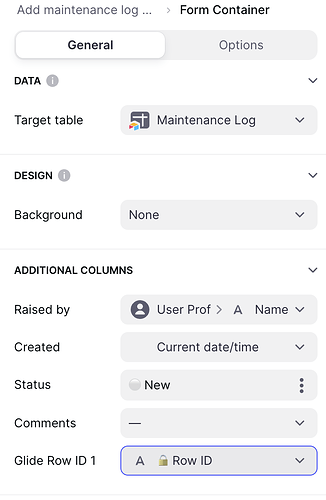 I haven’t used form containers much. Does it have an on-submit action? On-submit actions have been pretty reliable if I want to use a rowID somewhere, because I assume it only starts after the row is added.

Thanks for that - that worked. I added a custom action to the Form container - which updated a new column with the Row ID. Takes a moment or two to sync over to Airtable, but it works!

Great to hear Andrew, have a nice day!